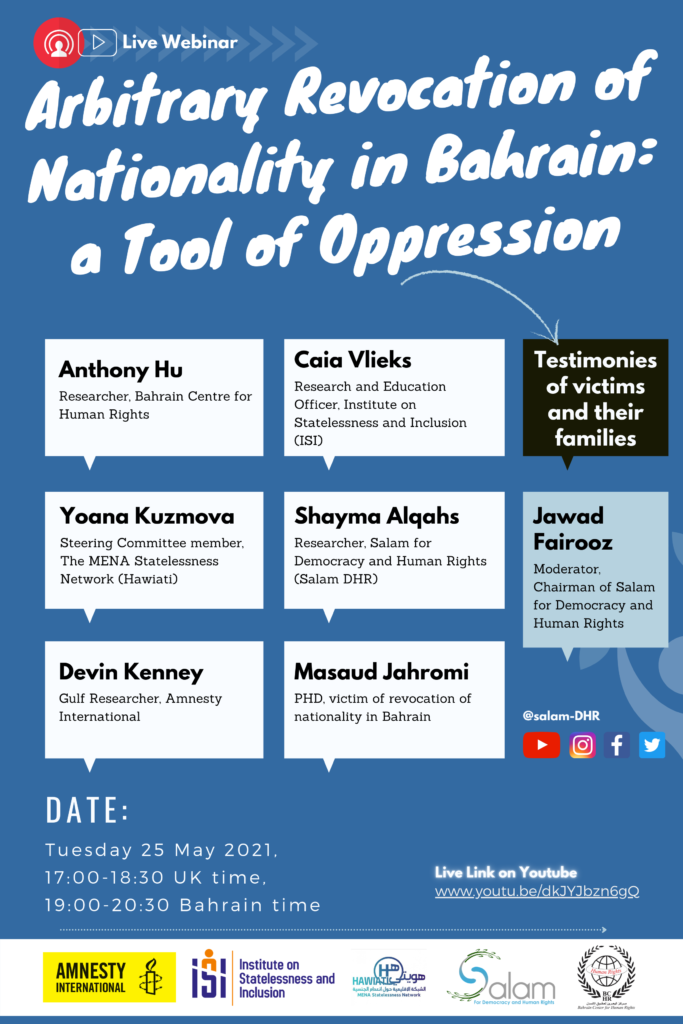 Report launch: Arbitrary Revocation of Nationality in Bahrain: a Tool of Oppression- Salam for democracy and Human Rights joint report with the Institute on Statelessness and Inclusion  and The MENA Statelessness Network.

Featuring Jawad Fairooz, Chair, Salam for Democracy and Human Rights, in conversation with:

Masaud Jahromi –PHD, victim of revocation of nationality in Bahrain with

Testimonies of victims of revocation of nationality and their families

There will be 20 minutes for discussion.
To arrange an exclusive interview with the panelists, contact Abbas Taleb on +33754212384

Bahrain – Nationality revocation: arbitrary and anti-democratic tool to crack down on dissent and maintain grip on power

Salam for Democracy and Human Rights’ (SALAM DHR) joint report with the Institute on Statelessness and Inclusion (ISI) and The MENA Statelessness Network (Hawiati), Arbitrary Revocation of Nationality in Bahrain: a Tool of Oppression, documents Bahrain’s citizenship deprivation of hundreds of Bahraini citizens, between 2012 and 2019.

Dr. Ali Ahmed Al-Dairi, an academic who published “Stateless”, a book about his citizenship revocation, stated: “the state of revoking your nationality plunges you into an existen.al ordeal that has no treatment or cure.”

This report draws on Bahrain’s revocation of citizenship of human rights defenders and advocates after the 2011 Bahraini uprising. It analyses the Bahraini nationality law and subsequent amendments adopted by the state to revoke nationality and deny rights to its citizens to quell dissent.

The report discusses the international legal framework regarding nationality and its deprivation and revocation, drawing on relevant international law standards, as synthesized in the Principles on Deprivation of Nationality as a National Security Measure. It focuses on n the trend of Bahraini nationality-revocation post-2011, considering Bahrain’s evolving national law, in addition to two cases studies about citizenship stripping discussed in detail, to give and overview of the process and struggle that some Bahrainis and their families go through as a consequence of the government’s arbitrary practice. The report also focuses on a dangerous precedent set by the Government of Bahrain , by deporting most of those who were stripped of their nationalities, even though Bahrain is their only country.

The key findings of the report include:

Reflecting on the report’s conclusions and recommendations, Abbas Taleb, the principle author of the report and SALAM DHR’s member, said:” This arbitrary practice affects not only the victims, but also their families and future generations. Bahrain should reinstate full citizenship to those who were impacted, provide them with an effective remedy and reparation, and dismantle the arbitrary laws which enable citizenship revocations.”