The world’s largest human rights organizations condemned the Bahrain Court of Appeal ruling on June 5, 2018 against prominent human rights defender and President of the Bahrain Center for Human Rights Nabeel Rajab for five years for charges related to tweets he posted on Twitter and his testimony about torture in Jau Central Prison as well as his criticism of Saudi-led military operations in Yemen. 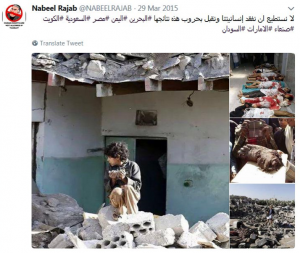 Nabeel Rajab also faces another sentence of up to two years in jail for the expression of opinion as a result of television interviews he made in 2015 and 2016. It is worth noting that the prison administration of Jau keeps Rajab in a narrow cell that does not meet the minimum standards of hygiene. Earlier, according to relatives, the prison administration itself prevented him from drinking water.
Human Rights Watch said the charges against Rajab were a clear violation of his right to freedom of expression, guaranteed under Article 19of the International Covenant on Civil and Political Rights, which Bahrain ratified in 2006.
Amnesty International said in a statementissued on 5 June 2018: “The Bahraini Court of Appeal has missed a valuable opportunity to carry out the proper procedure and to release Nabeel Rajab. His continued detention is but another witness to the intention of the Bahraini authorities to continue non-stop to suppress the right to freedom of expression, and to silence every peaceful critic of its policies”.
“The Upholding of a five-year prison sentence for minor tweets underscores the fact that the Bahraini authorities are trying to silence Nabeel Rajab, the political detainee who is subjected to humiliating treatment at all costs,” also said Dimitris Christopoulos, head of the Paris-based International Federation for Human Rights. 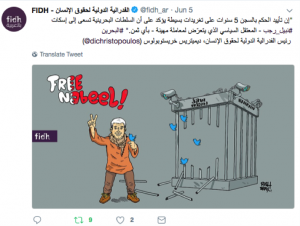 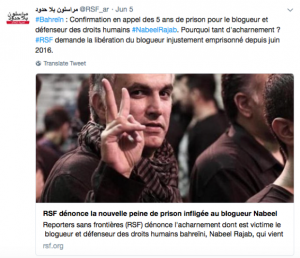 The European Union called on the government of Bahrain to release rights activist Nabeel Rajab, one day after the Bahraini Court of Appeal upheld the five-year sentence. The EU saidin a statement that there were grounds to believe that Rajab’s right to a fair trial was not respected nor maintained, as in previous judgments issued against him in January and February 2018. 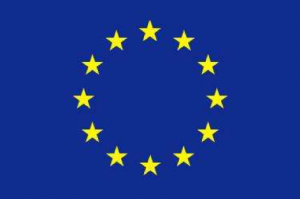 In another international response to Bahrain’s decision, the Paris City Council unanimously decided to “grant honorary citizenship to Nabeel Rajab, Deputy Secretary-General of the International Federation of Human Rights, imprisoned for his struggle for human rights and also is calling for his immediate release”. 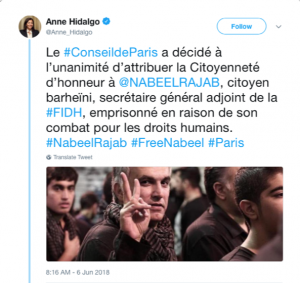 “With this gesture, we demand the release of Nabeel Rajab. Paris will always be there to defend the freedom of opinion, the freedom of the media and the support of the oppressed in the world,” the mayor of Paris said in a tweet at her Twitter account. 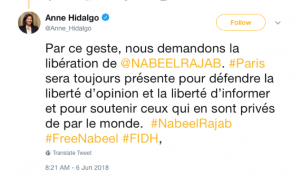 France’s ambassador to Bahrain also said on her Twitter account: “France is closely following the situation of Nabeel Rajab and has received with concern the assertion of the five-year prison term for Bahraini oppositionist and human rights defender Mr. Nabeel Rajab on the backdrop of his twittering. France expresses its deep concern about the treatment of human rights defenders and political opponents in the country”. 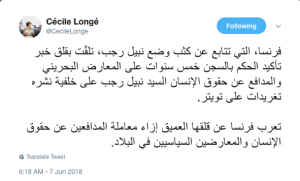 Where Jawad Fairooz, president of SALAM for Democracy and Human Rights said: “The world is proud and appreciative of the human gestures of prominent rights activist Nabeel Rajab, while Bahrain is imprisoning, persecuting and abusing him while he is in prison”. 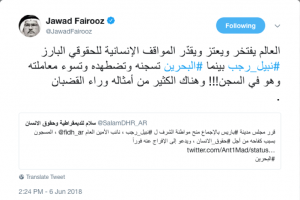 In a similar vein, Mohammed Sultan, Advocacy Officer for SALAM DHR, said: “The authority in Bahrain should correct the mistake, release and rehabilitate and compensate for damages prominent rights figure Nabeel Rajab sustained, and stop retaliation against rights activists and politicians who simply express their views”. 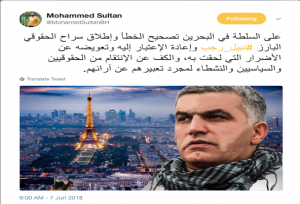 SALAM for Democracy and Human Rights calls on the Bahraini authorities to immediately release Nabeel Rajab and stop trying to silence him and his human rights activities. SALAM DHR also calls on the Bahraini authorities to listen to the voice of the international community, which monitored Rajab’s trial and reviewed the case file, and concluded that Rajab did not commit a crime. His humanitarian work is worthy of honor and must he be acquitted of all the malicious charges against him. The government must adopt judicial reform in Bahrain.