Seven human rights organizations, namely: Salam for Democracy and Human Rights (Salam DHR), Amnesty International, MENA Statelessnes Network (HAWIATI), Bahrain Forum for Human Rights (BFHR), Gulf Institute for Democracy and Human Rights (GIDHR), and Bahrain Center for Human Rights (BCHR) organized a webinar event on entitled: “Prospects of Revoking Nationality in Bahrain”. The event was broadcasted live on YouTube in Arabic with simultaneous translation in English, as the duration of the event extended for two hours, as it began at 9pm Bahrain time on November 17, 2020. Representatives of the organizing organizations participated in the event, in addition to a number of victims of revoking citizenship in Bahrain.

Baqer Darwish (BFHR): Revoking citizenship is one of the tools for political revenge

The event was moderated by the chairman of Bahrain Forum for Human Rights, Baqir Darwish, and in his opening speech, he spoke about the anniversary of Bahrain’s initiation of using the punishment of revoking citizenship against activists, and gave an overview of the negative repercussions on individuals whose nationalities revoked as well as their families, noting that the Bahraini authorities have created the legislative environment – in contravention to International Laws  – to increase the scope of employing revoking citizenship as one of the tools of political revenge, as well as using the official media to incite hatred and issuing more of these arbitrary rulings. 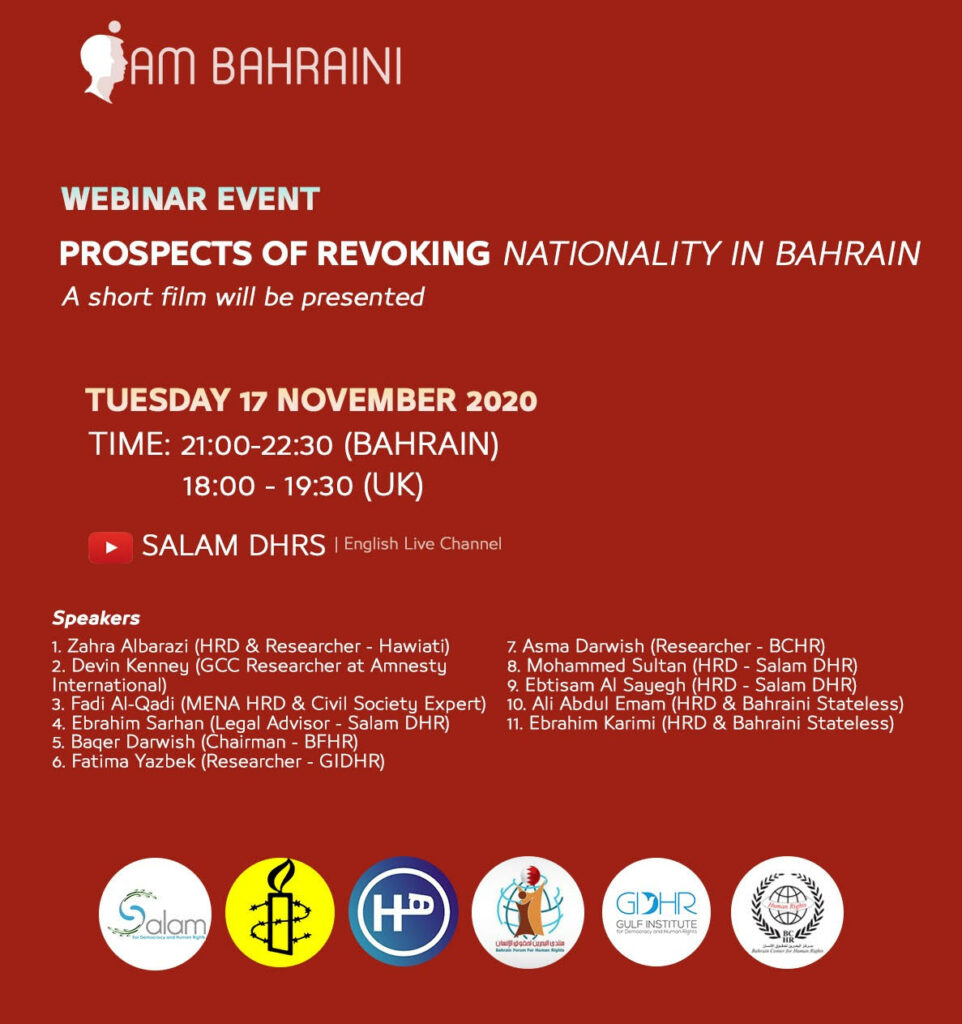 Zahra Al-Barazi (HAWIATI): Bahrain is an example in employing statelessness for malicious reasons

The first speaker was Zahra Al-Barazi, member and a researcher at HAWIATI Organization, MENA Network on Statelessness, where she mentioned types and terms regarding stateless people in the Middle East, and indicated that what they are practically unites are similar civil and administrative violations to which they are exposed, and she pointed to the problem that there are no clear statistics about the number of stateless people in this region, and mentioned about discrimination in nationality laws against women, by adding that stateless people pass the problem on to their children and future generations.

Devin Kenney (Amnesty): The importance of keeping documents revoking citizenship because it is important in defense in order to recover the victims’ nationality

The second speaker was Devin Kenney, a researcher in the Gulf region at Amnesty International, and he spoke about the role of Amnesty in moving the media by publishing data that is written about violations of revoking citizenship in Bahrain, and he advised persons whose nationalities were revoked to preserve documents of their nationality, because it is important in defense for the recovery of their it. He also talked about how to use international mechanisms and to communicate with the special rapporteurs at the United Nations, and mentioned that these mechanisms are not a substitute for local actions on the ground.

Al-Qadhi (HRD): We must work on filing international lawsuits and seek the help of NGOs to provide legal advice

The third speaker was Fadi Al-Qadi, an expert on human rights and civil society in the Middle East. He talked about the existing problems about the means of grievance that stateless persons can resort to in order to obtain reparation and redress, and his opinion was that pleading and grievances in the United Nations mechanisms are not sufficient. What is important is the documentation mechanisms for a case.  The person whose nationality has been revoked and the preservation of civil documents, such as the civil card, and the passport, to be used in claiming the restoration of nationality, and he called on the victims to work on filing international lawsuits and to seek the assistance of NGOs to provide legal advice.

The fourth speaker was Ibtisam Al-Saegh, who is networking officer at Salam DHR. She mentioned that revoking citizenship is a moral execution. and spoke about the difficulties facing victims, such as freezing their bank accounts and all other civil rights. She referred to the social implications where the rest of society is afraid to deal with victims due to their fear of authorities, and that the side effects over their families, in addition to financial effects over their life due to their inability to work.

Yazbek (GIDHR): Bahraini authorities are striking against international condemnations and continuing their policy, which violates UN laws, by revoking citizenship

The fifth speaker was Fatima Yazbek, Chair of the Studies and Reports Committee at GIDHR.  She talked about reviewing international attitudes and conventions related to the deprivation of citizenship, and mentioned the UN decisions that prohibit revoking citizenship, and how the Bahraini authorities are striking against all international condemnations and continuing their policy in violation of international laws by continuing to revoke the nationality of citizens.

Sarhan (Salam DHR): Bahraini constitution has been adapted with legal loopholes that allow the use of revoking citizenship

The sixth speaker was the lawyer Ibrahim Sarhan, a legal advisor at Salam DHR, who presented a legal stand and a critical reading of the Bahraini constitution and local legislations, and how it they are adapted with a loophole allowing for the use of revoking citizenship.

Asma Darwish (BCHR): Activists do not face the risk of imprisonment only if they raise their voices to criticize the authorities

The seventh speaker was Asma Darwish, a researcher at BCHR, who spoke about the Bahraini authorities introducing new repressive methods, including the penalty for revoking citizenship. Activists do not face the risk of imprisonment only if they raise their voices to criticize human rights violations, they risk statelessness through the misuse of power by authorities.  The justice system in Bahrain is not impartial, and the judiciary has been used to strip nationality several times.

The eighth speaker was Muhammad Sultan, Advocacy Officer at Salam DHR, who spoke about the “anabahraini” (https://www.anabahraini.org/ ) website, and specializes in documenting all issues related to revoking nationality in Bahrain after the uprising in 2011, and since November 2012. He mentioned that one of the goals of the website is to document, count, and archive all cases of revocation of Bahraini nationality, and to be a reference for studies and research centers, organizations, media and journalists looking for information on this topic, and also reviewed data and reports contained in this site. The site is in both Arabic and English.

Abdel-Imam (HRD): “I knew that my nationality had been revoked through the media”!

The ninth speaker was Ali Abdul-Imam, a Bahraini blogger and human rights defender and victim of revocation of citizenship in Bahrain. He stated that until now he does not know why his nationality was revoked, and what crimes he committed, or what were charges against him! He knew about revoking his nationality through a list published by the authorities on the Bahrain News Agency website! He has also not been officially informed of revocation of his nationality until today! He talked about the case of his son, who was born in Britain and could not obtain any nationality!

Karimi (HRD): “I am the victim of revocation of nationality twice”

The tenth speaker was Ibrahim Karimi, a Bahraini human rights defender and a victim of nationality revocation in Bahrain.  He stated that his nationality was revoked twice, the first was in 1980 without a judicial order, and he was deported by ship to Iran and was able to return to Bahrain after 25 years, and his nationality was revoked once again in November 2012 and he learned heard that on Bahrain TV! In addition, he was arrested in 2015 and sentenced to deportation out of the country where he was deported to Iraq. He spoke about the suffering faced by victims, and confirmed that they it is as moral execution.

The last speaker was Ahmad Jaber, one of the Kuwaiti stateless (Bidoon) victims. He mentioned that he was deprived of his nationality since birth, and how this affected him, starting from being deprived of his studies, and how this affects all aspects of civil rights. He referred to these procedures as a major violation to the Kuwaiti constitution.

In addition, during the event, a short film was presented about one of the victims nationality revocation, Dr. Masoud Jahromi. He referred to his experience with revoking nationality and how he was summoned to deport him from Bahrain after being deprived of all his rights as a Bahraini citizen.