SALAM DHR expresses its deep concern about the continuation of the Bahraini authorities’ systematic suppression of freedom of opinion and expression in general, and against social media users in particular, and their continued pursuit of activists and human rights defenders. A number of human rights defenders, activists, lawyers and journalists were recently targeted and threatened in a recent statement by Bahrain Ministry of Interior, followed by convictions by the highest officials. A statement issued by the Prime Minister of Bahrain on 20 May 2019 instructed the Ministry of Interior to deal firmly with bloggers and users of social media sites that provoke “sedition.” On the same day, the King of Bahrain directed the security services to deal firmly against the misuse of social media sites.

The Ministry of Interior in Bahrain has recently accused human rights activists, journalists and social media activists including Deputy Chairman of SALAM DHR, Sayed Yousif Almuhafdha, social media activist Hassan Abdulnabi Al-Satri, journalist Adel Marzooq, and lawyer Abdullah Hashim, for cyber crimes that allegedly provoked sedition among Bahraini society. The Ministry of Interior is currently in the process of legal action against them.

Lawyer Abdullah Hashim was detained for a week on 15 May 2019 after being charged with broadcasting false news and abuse of social media sites, and he was released on 22 May. Mr Hashim said in a tweet posted on his twitter account that his phone was confiscated, which means that a lawsuit still exists and his release does not mean the end of the case. Mr Hashim had previously published a video in which he warned about public land being turned into private property, pointing to the son of the Minister of the Royal Court converting public land into his own private property in the area of ​​Arad.

The Electronic Crimes Unit at the Ministry of Interior issued an official statement published on its website on 20 May 2019 accusing the prominent human rights activist Sayed Yousif Almuhafdha, the Deputy Chairman of SALAM DHR who is residing as a refugee in Germany, as well as the activist and social media blogger Hasan Abdul Nabi Al-Sattari, a refugee in Australia, that they run accounts on Twitter, including “@Emp_Bahrain” in order to stir sedition and try to threaten the civil peace and social harmony and destabilize the security and stability in Bahrain. The Ministry of Interior claimed that these accounts are managed from the following countries: Iran, Qatar, Iraq, France, Germany, and Australia. It claimed that there were electronic cells inside Bahrain that provided the accused with information. The Ministry has already charged a group of people who have been sentenced to prison for running the “@Emp_Bahrain” Twitter account , the same account that Almuhafdha and Al-Satri have been accused of managing. Almuhafdha denied the charges and said “the new charge will not change my position, my work and my activities in defending the rights of our people, but it leads us to redouble our efforts”. “It’s disturbing – talking about human rights is not a crime,” Amnesty International Denmark GS, Trine Christensen commented on Twitter. 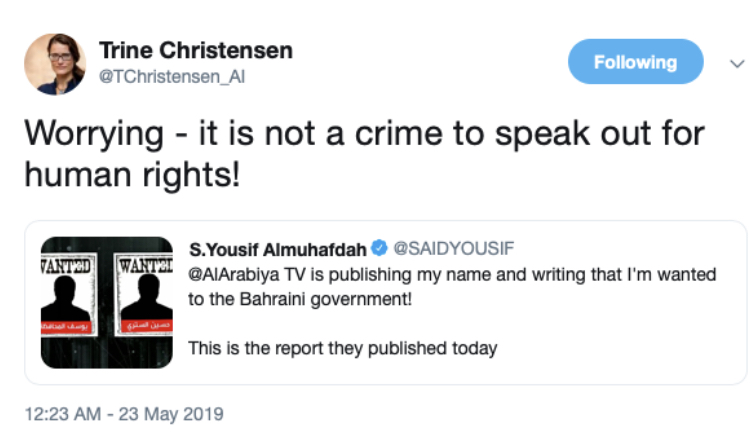 It is worth noting that Al-Arabiya TV channel broadcasted a biased media report in which it promoted the media disinformation campaign of the Bahraini Ministry of Interior. This is not the first time Al-Arabiya has promoted propaganda campaigns in favor of the security services in Bahrain. UK Broadcasting Regulatory Commission (OFCOM) fined Al-Arabiya, a Saudi Arabia owned channel, 120,000 pounds (approximately 171,000 US dollars) for broadcasting false “confessions” by Hasan Mushaima, prison of conscience in Bahrain, without explaining that he was tortured, which was proved by the Bahrain Independent Commission Inquiry (BICI) in 2011. 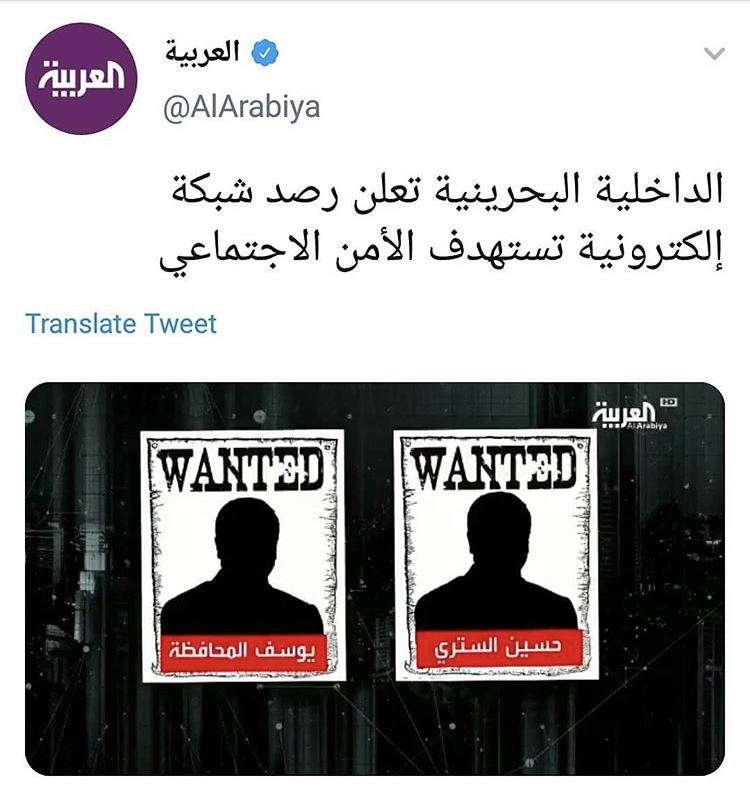 “Almuhafdha is a human rights defender of great integrity who continues to work peacefully for human rights in Bahrain. These absurd smears say more about Al-Arabiya than they do about Said Yousif”, said Andrew Anderson, executive director of Frontline Defenders. 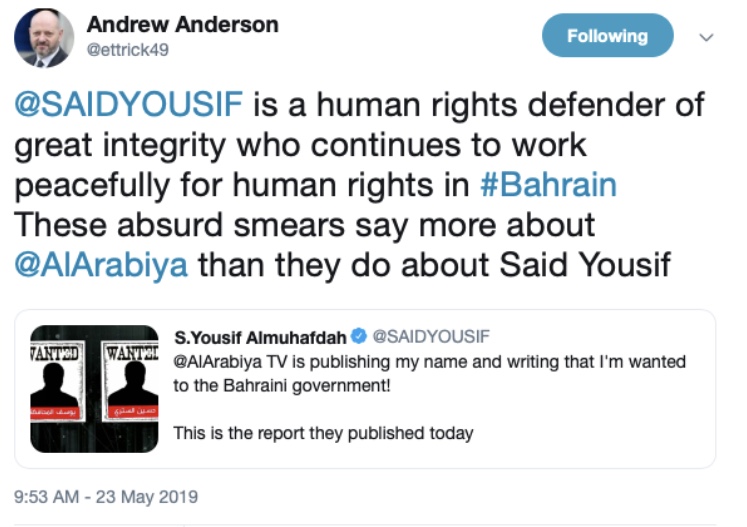 In addition, on 21 May 2019, the Electronic Crimes Unit at Ministry of Interior accused the journalist and editor of the Gulf House for Studies and Publishing, Adel Marzooq of cyber crimes through his account on Twitter that he aims to instigate the spirit of strife among the components of Bahraini society, and the Ministry will take legal action against him. SALAM DHR did not find in Marzooq’s account any of the Ministry’s allegations. Reporters Without Borders condemned the Interior Ministry’s statement and said these were attempts to intimidate and censor journalists.

The Internet has become a universal means of disseminating the information used by opposition movements, human rights activists and media professionals in Bahrain in light of the increasing human rights violations committed by the Bahraini authorities, a state which is hostile to the independent media, especially on the Internet and social networking platforms. Their views are evidence of interrogation and imprisonment in trials that lack justice and an independent judiciary, as was the case with the prominent human defender Nabeel Rajab, the Chair of Bahrain Center for Human Rights (BCHR). He has exhausted all stages of litigation in Bahrain and was sentenced to five years in prison because of criticism posted on the social networking site Twitter. As well as the writer in local newspaper Akhbar Al-Khaleej, Ibrahim Al-Sheikh, where he wrote an article entitled disinformation and military catastrophes. He was arrested on 14 April 2019 before being released by the Public Prosecution on 18 April 2019.

The authorities in Bahrain are responsible for all violations against users of social media sites, as well as the General Directorate for Combating Corruption and Economic and Electronic Security, which was established in 2011 by a royal decree, an organ of the Ministry of the Interior. In many cases, activists, human rights defenders, lawyers, and journalists were interrogated by the security authorities for their tweets.

Bahrain state policy is based on suppressing all forms of expression and freedom of opinion. It continues to censor publications and publishing houses, suspend their publication, close media institutions and block websites. Human rights defenders, journalists and activists on social media sites face harassment, assaults, arrests and torture in prisons and face long prison terms and the revoking of their nationality in the absence of an independent judiciary and the rule of law.

SALAM DHR strongly condemns the targeting of activists and calls on the Bahraini authorities to stop fabricating charges against human rights defenders, journalists and activists and to bring down the malicious charges against them and stop the campaigns of disinformation. Those who have criticized the activists through their false media campaigns and published their names on trumped-up charges must be held to account. The right to disseminate information and to be able to express critical views is guaranteed under international law.